How Puzzles and Brain Teasers Affect the Mind 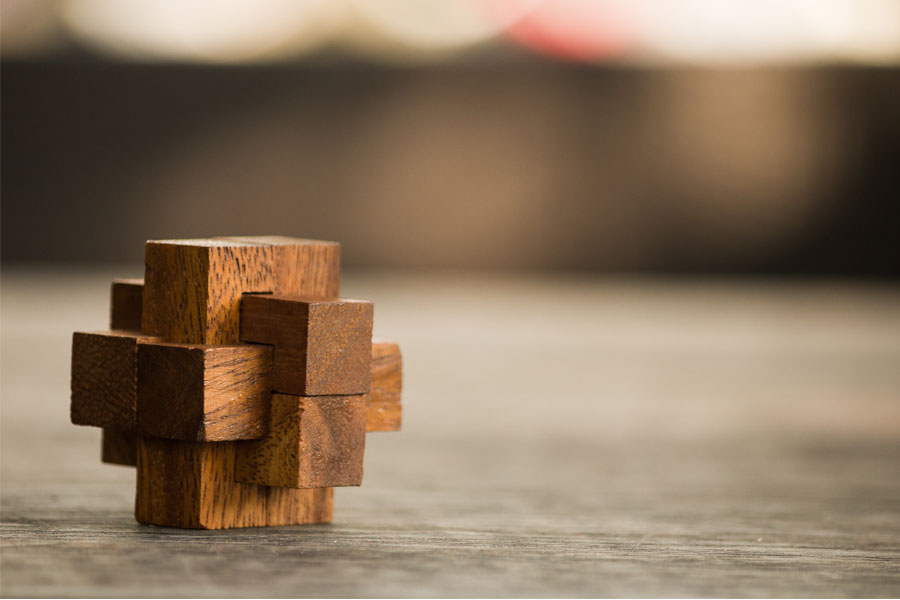 There’s a lot of speculation regarding whether or not puzzles and “brain training” can actually sharpen your cognitive abilities. Many people believe it’s all just a hoax or a placebo effect capitalized on by marketing schemes from companies trying to sell an overpriced product, and that you can’t improve brain and mental skills you already have. However, one simple Google search will prove to you that there are innumerable benefits to implementing puzzles and brain teasers as a regular part of your life and routine.

By playing simple mind games, you can change thought patterns, habits, abilities, and even reshape your way of thinking. In fact, some of the most esteemed psychologists recommend training your brain using puzzles and games to optimize your mental performance and even raise your IQ. Not only have puzzles and brain teasers been proven to slow cognitive deterioration later in life, but they can help you improve mental function when you’re at your peak as well.

Think Outside the Box

We’ve all been stuck on a mental block at some point, so we’re all familiar with the frustration that comes with not being able to find an angle or perspective to tackle it. But guess what solution has been found to combat such an ailment? Practicing puzzles and mind games.

Psychological studies have observed that brain teasers such as riddles and wordplay encourage you to pull from sources such as language and experience instead of your own brain for answers. This type of training will help you become unstuck from a proverbial rut, because you’ll be able to think your way around the problem instead of trying to power through an immovable block. Typically, the ability to think outside the box helps in a myriad of problem-solving and conflict resolution settings. This can be utilized in work, school, tests, and even in relational or parental conflicts.

Delay the Effects of Damage

Your brain is like a muscle that needs to be exercised regularly to maintain peak performance, but you can also prevent future ailments and diseases by playing brain teasers. It’s not just a placebo effect like some people would have you believe. Studies have demonstrated the effects of puzzles on neurological diseases such as Alzheimer’s and dementia, and they’ve been proven to help slow the brain cell damage caused by these illnesses. Puzzles can also help strengthen the connections between nerve cells in your brain, therefore delaying the onset of the diseases as well. Scientists have also found a correlation between the length of time in which you’ve been solving puzzles and the delay in the onset of Alzheimer’s, so implementing this habit sooner than later is in your best interest.

Working in collaboration with other people is a lost art, but it’s one of the most useful and vital skills you could acquire in your lifetime. Certain brain teasers such as those found in escape rooms emphasize the connection between teammates in the room, how they play off each other, and their communication skills. Escape rooms are especially interesting, though, because different group sizes deeply affect the dynamic and atmosphere in the room, and there are very different tactics you have to adopt based on the numbers. In any puzzle or conflict, both inside or outside an escape room, open lines of communication are imperative to your success and performance. A Yale study supported the notion that practice makes perfect even in “group project” settings, and since you’ll likely be dealing in group efforts for the rest of your life, get your reps in now. Training yourself in teamwork-related skills aids in dealing with relationships, work, and school to improve your performance in each of these areas to help you succeed.

Many psychologists encourage taking a break from work that’s bogging you down in order to increase productivity and boost your performance. The idea is that you’ll be able to have a moment to step away, reset, and come back to your task with increased energy, new avenues of creativity, and drive. However, you won’t feel any of the effects or benefits if your break is just watching Netflix or sitting on Instagram, because you likely won’t come back with ample inspiration to truly feel the effects of your timeout. The best method of optimizing post-break productivity is by tackling a puzzle or brain teasers such as sudoku or even an online jigsaw puzzle. This way you’re able to take a break while not being completely put into relaxation mode, and a different brain function is being challenged so you can come back to work refreshed and stimulated.

Put Your Mind to the Test

Escape rooms, puzzles, and brain teasers are some of the most under-utilized forms of self-care and maintenance, and they desperately need the attention they deserve. The best thing we can do for our minds and bodies is to keep them in shape and operating at optimal performance, but we often neglect opportunities to exercise our minds. So how can we change this and implement brain training into our regular lives in both an efficient and entertaining way? It’s easier than you would think.

There are a plethora of apps you can download onto your phone for well-rounded on-the-go training, such as Lumosity or Elevate. Or you can stick to the classic, tried and true games like crossword puzzles and sudoku, which you can do on your phone or in a small booklet. However, if you want to go big by practicing all these skills at once and bringing in a group of people for extra fun and challenge, you can try an escape room. There’s no limit to the ways you can train your brain and how doing so will help you both right now and in the future, and it’s all readily available and accessible. What are you waiting for? Download an app, buy a puzzle or a game-booklet, or visit EscapeWorks Denver and see what brain teasers can do for you.